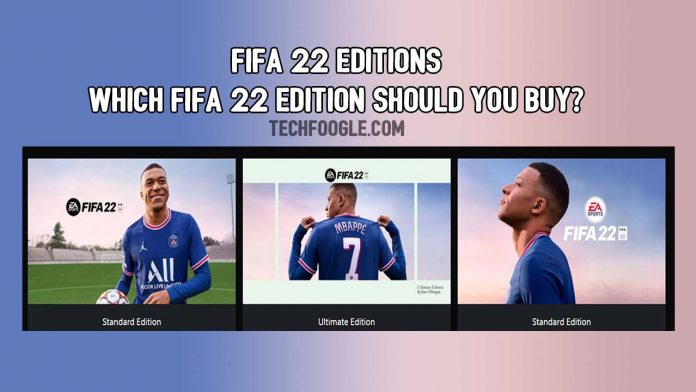 Which FIFA 22 Edition Should You Buy?: The FIFA 22 release date is approaching, and the game is now available for pre-order. If you want to buy FIFA 22 right now, you’ll need to figure out which version is best for your budget and degree of interest.

FIFA 22 is now available for PS5, PS4, Xbox One X, Xbox One S, Xbox One, Windows PC, Nintendo Switch (Legacy Edition), and Stadia, and will be available in a few weeks.

To begin playing FIFA 22 in September, you must either pre-order a specific edition of the game or get an EA Play membership. Beginning September 22nd, EA Play members will get access to the game.

Which FIFA 22 Edition Should You Buy?

FIFA 22 is now available in two editions: regular and Ultimate, which has an early release date and certain bonuses.

If you’re going to pre-order FIFA 22, make sure you get the appropriate edition. Each has its own set of advantages and disadvantages, and today we’ll walk you through each edition and explain the major distinctions between a physical and digital copy of the game.

FIFA 22’s standard edition is the most basic version. If you pre-purchase the game, you will receive a copy of the game as well as other goodies for PS4 of Rs. 3,999, or Rs. 4,499 if you order a copy for the PS5 or Xbox Series X.

The Legacy Edition, which costs Rs. 3,999, is your only choice for now if you want to play FIFA 22 on your Nintendo Switch.

A Team of the Week 1 player item, a Kylian Mbappé Loan item, a FUT Ambassador Loan Player Pick, and Career Mode Homegrown Talent are among the FIFA 22 pre-order incentives.

There aren’t many FIFA 22 discounts available right now, but EA Play users can get the standard 10% discount on a pre-order.

The FIFA 22 ordinary edition is the game’s most affordable version. It is also the edition that the majority of people should purchase. So, who should buy FIFA 22’s regular edition?

You can pre-order it today at a variety of stores, including Amazon.

FIFA 22 Ultimate Edition: is a special edition of FIFA 22

FIFA 22 Ultimate Version is EA’s other option, which is more costly (a staggering Rs.2000) than the Standard edition but includes some bonuses.

You’ll get an un-tradeable FUT Heroes Player if you pre-order the Ultimate Edition by August 11th, in addition to the pre-order incentives you’ll get with a normal copy.

A Ones to Watch Player Item, 4600 FIFA Points, Dual Entitlement (free upgrade to next-gen), and early release date are all included in the Ultimate Edition. On September 27th, those who pre-order the Ultimate Edition will be able to play the complete game.

So, who is the best candidate for FIFA 22 Ultimate Edition?

It’s currently available for pre-order through a variety of stores ea.com.

FIFA 22 is available in both physical and digital forms. Here are a few things to think about before deciding on one or the other.

If you’re tired of having CDs all over the place, you should go for a digital version. You’ll also want to go digital if your discs are frequently lost or destroyed in your house.

Go digital if you play a lot of different games and don’t want to have to pull out the disc every time you want to play. When you buy a digital copy, you’ll have instant access to the game whenever you turn on your console.

Purchase a digital copy if you want to play the game as soon as possible in September/October. You may pre-load the game ahead of its release date, allowing you to begin playing as soon as it becomes available.

There are a few other reasons to buy a physical copy of FIFA 22.

If you buy a physical copy, you may sell it to OLX or Quikr after you’re finished with it. When you’re ready to move on to another game, you’ll be able to rent your copy to friends or family members.

Pre-Order FIFA 22 to Qualify for These Bonuses

If you pre-order a copy of FIFA 22, you will receive certain extras. Some of you may find that placing an early order is worthwhile.

The following are the FIFA 22 pre-order bonuses for the FIFA 22 Standard and Ultimate editions:

You’ll get an untradeable FUT Heroes player if you pre-order FIFA 22 Ultimate Edition before August 11th.

If you plan to play FIFA Ultimate Team or any of the other game modes in FIFA 22, you should pre-order a copy now.