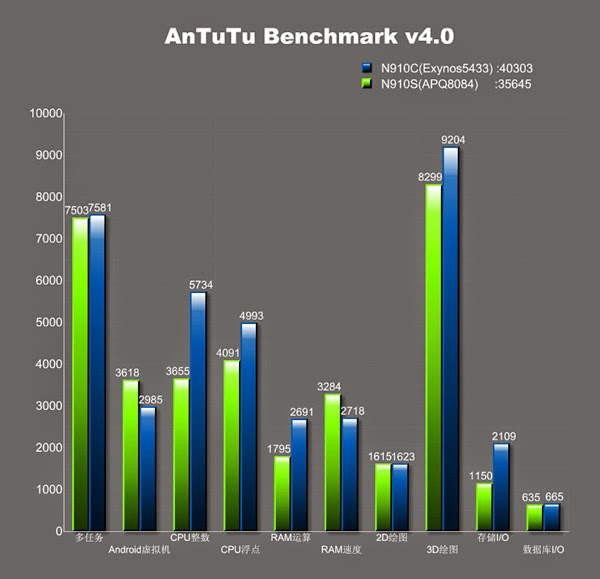 The guys over at AnTuTu today released benchmarks including both SoC versions of the Galaxy Note 4, with the benchmarks also detailing many other specs of the device. As expected, the Snapdragon delivers similar performance to what has been reported over the last few weeks. But we have for the first time a good look at what Samsung’s new generation SoC’s may provide.
Per AnTuTu’s reported scores, the Exynos 5433 seems to outperform the Snapdragon 805 across the board. The Exynos 5433 sports four

Cortex-A7 and four Cortex-A15 cores, contrary to what the leaked benchmarks suggest, but still manages to offer considerably higher benchmark scores compared to the Snapdragon chip.

Model lineup is not finalized

New information from our sources detail that the lineup that we reported about recently is not yet set in stone. Samsung is still evaluating between the Snapdragon and Exynos variants.
We have come across several new model variants of the Exynos model: “trelte”, “trhlte”, and “trhplte”. Some of these variants also carry carrier specific models for AT&T and T-Mobile, which overlap the Snapdragon models that we reported about last time.
Furthermore, there has been appearance of a new Exynos SoC: While we are certain that the 5430 goes by the “Helsinki” codename, we assumed the 5433 would be the new “HelsikiPro” chip. However even newer details make light of another chip: “HelsinkiPrime”. Is this the 5433 all along, or does Samsung have an even more powerful chip in store than the one benchmarked on AnTuTu?
Other details we can report on is that Samsung intends to use a new Broadcomm BCM4358 WiFi chip in its device. Recent prototypes have also replaced NXP PN547C2 NFC solution for Samsung S.LSI’s own S3FWRN5 chip.
Finally, we can confirm the rumoured 2-model approach of the Note 4: The device consists of 2 projects: “TB” and “TR”. What the differences between the two are is still unclear, but each will come in various SoC configurations depending on  market. We confirm the N910 and the N915 model numbers for these devices.

Stay tuned in the following weeks as we report on the developing story.
Guest written by Andrei F.