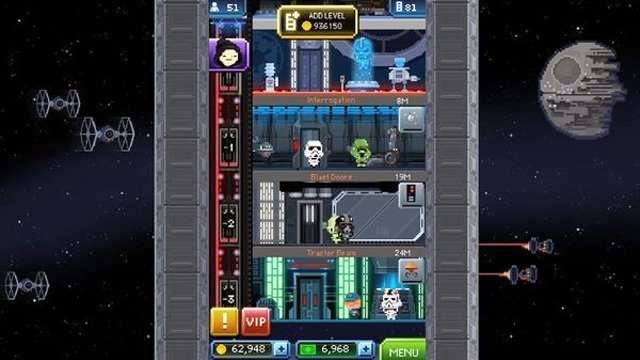 The first Star Wars game to come out since Disney took over the franchise last year (not counting the Angry Birds Star Wars games) is finally out, and it’s something that nobody expected. The game, named Tiny Death Star, has been made by NimbleBit, who many might remember were the minds behind Tiny Tower. Tiny Death Star has quite a bit in common with Tiny Tower too.

The gameplay is essentially the same as Tiny Towers, albeit with a Star Wars theme to it. Even the art style is the same, everyone including Stormtroopers and Darth Vader have been recreated in Tiny Tower’s adorable pixel art style. The game is currently available for free on iOS, Android, Windows Phone and Windows 8. Since it’s free, however, be wary of in-app purchases.

Manage your own tiny Death Star

We gave the game a try and found it to be nearly identical to Tiny Tower, but with a thick layer of Star Wars. The writing itself is quite funny, especially the capitalism-obsessed dialogues of Darth Vader and Darth Sidious. The game has quite a few references to the classic movie series, such as the 8-bit versions of the Imperial March or the Star Wars main theme song playing in the background as you manage the stocks of the Mos Espa Bar.

All in all, Tiny Death Star is a cute game that should keep some occupied for five minutes while waiting for the bus, for example. This is basically the only current Star Wars game we’ll get till DICE is done making Battlefront 3 anyway.