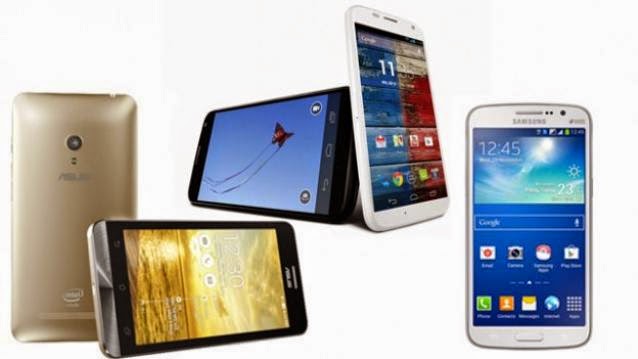 It might seem as though everyone has an iPhone or Galaxy smartphone. But many customers are eschewing the best cameras and screens — and their top-end price tags — and choosing models that can get the job done at less than a third of the cost.

Sales of high-end Samsung and Apple phones remain robust, but demand for budget phones is growing. About a third of the smartphones sold in the U.S. between July and September cost less than $200, up from 18 percent a year ago, according to tech research firm IDC. A top-end phone costs $600 to $700 at full price, before the subsidies some phone companies offer in exchange for committing to two-year service contracts.

No longer are these cheap smartphones mostly no-frills devices with small screens and slow processors, says Ramon T. Llamas, a research manager for phones at IDC. As the costs of parts drop, phone manufacturers are able to outfit less-expensive models with advanced features once limited to high-end devices.

These phones lack the latest innovations, such as fingerprint security sensors and heart-rate monitors. They aren’t as fast, and their cameras aren’t as sharp. But the technology is more than adequate for those who just want to check email, look up sports scores and play video. Many cheaper phones now even offer the fastest wireless speeds on 4G LTE cellular networks, notes Jeff Bradley, senior vice president for devices at AT&T.

“There’s a certain status to carrying an iPhone or Samsung Galaxy, as an example, but there are also people who say, ‘I want a good, reliable phone, but I’m not willing to spend as much money on that,” says David Owens, a senior vice president at wireless carrier Sprint Corp.

Joe Liggio, 16, a high school student in New York, says many of his friends have iPhones or Samsung phones, but he’s never felt envy carrying his $180 Moto G from Motorola. He says it does everything he needs well, including texting, taking pictures, playing music and accessing the Internet.

The cheaper phone does mean smaller profit. According to IHS iSuppli, ZTE makes about $130 per Nubia device sold, compared with several hundred for Apple and Samsung devices before marketing and administrative costs. But targeting the budget crowd has made ZTE the No. 5 smartphone vendor in the U.S., according to IDC.

Wait, you say, $200 is “cheap?” Many consumers in the United States see a $200 price tag on a typical high-end phone and think that is what the phone costs. But the phone company actually subsidizes about $450 or so of the total cost and recovers that by charging higher service fees for voice, text and data over the life of a two-year contract. Some carriers are now pushing customers to pay a phone’s full price in installments, such as AT&T’s Next plan, but $27 a month over two years doesn’t sound as bad as $650 all at once.

So who are the main buyers of these budget phones? The highest demand has been from those with prepaid wireless plans, which are popular among first-time smartphone buyers as well as customers who have poor credit and have to pay the full price of phones up front. But even that is changing.

Doug Kaufman, Sprint’s director of device strategy, says that 90 percent of phone sales with traditional contract plans had been for high-end devices, including year-old Apple and Samsung models. That’s dipped to roughly 80 percent over the past half-year. Not everyone wants to pay $27 monthly when a lower-end phone can be had for less than $10 a month. And with the rise of family plans, parents are getting cheaper phones for their kids while choosing the latest and the greatest for themselves, he says.

Michael Weaver, an executive at the mobile-messaging firm Waterfall in New York, bought a Motorola Droid Mini for $50 with a contract, compared with $200 upfront for a high-end phone. Others “feel like they need to buy (something) that can launch the space shuttle, but they don’t use half the features,” he says.