BlackBerry 10.2.1 update makes it much easier to install Android apps 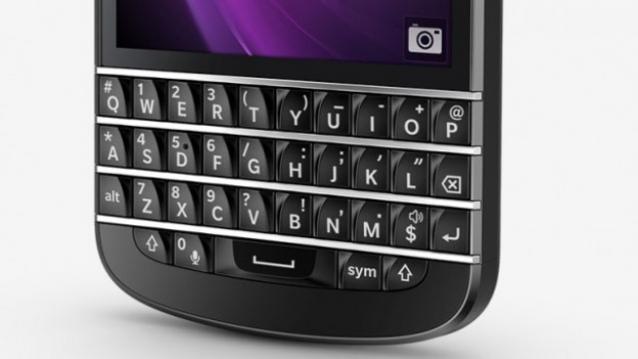 BlackBerry has rolled out an update to the BlackBerry 10 OS, releasing version 10.2.1 globally through operators. While it may seem like a smaller incremental update as compared to the move
from 10.1 to 10.2, in reality 10.2.1 brings several new enhancements to BlackBerry 10 and is mostly focused on the platform’s core USP i.e productivity. Interestingly quite a few of the new features like speed dial for physical QWERTY keyboards or the ability to delete messages locally or on the server (or both) were available the older legacy BlackBerry 7 OS and have been belatedly brought to BlackBerry 10. Here’s what has changed.

Direct access to APKs
While BlackBerry won’t talk much about this and interestingly completely ignored it in the official media release, the biggest new feature is that users no longer need to convert an APK to a BAR before sideloading an Android app. Now, users can download APKs to the local storage and it will be converted on the fly to a BlackBerry BAR file, ready to be installed. While Google Play cannot be accessed directly, third party Android stores like the 1Mobile app store or the Amazon Appstore that offer several apps can be installed and users can directly access apps from these curated stores rather than look for them separately.

This is big news because most users were not comfortable with the earlier sideloading process. The Android runtime supported is 4.2.2, so a small proportion of Android apps may not work on BlackBerry 10.2.1. For instance, India Against Spam, a very useful Android app that automates the complicated process of sending complaints on spam SMS and calls in India doesn’t work on BlackBerry 10 since the app can’t access the call/SMS history on BlackBerry 10. But most apps we’ve used, from Google Maps to Instagram to games like Temple Run, Candy Crush Saga and even niche apps like Adda for managing co-operative housing societies work perfectly well. With this, BlackBerry has gone a long way towards solving the app problem on the platform. BlackBerry has refused to comment on speculation that BlackBerry World will feature a new section for Android APKs alone. But media reports have said that BlackBerry is making a renewed pitch to Android developers to offer Android apps on BlackBerry World.

Customisable pinch gesture to filter BlackBerry Hub
While BlackBerry Hub is a great single-point communication hub that includes e-mail, instant messaging, social networks, breaking news and more, a new feature lets users instantly filter the message list. Users can now customise the Hub to show only Unread Messages, Flagged Messages, Drafts, Meeting Invites, Sent Messages or Level 1 Alerts, and can activate it with a pinch gesture on the Hub’s message list. The idea is to quickly see what’s most important and deal with it first.

Quick language switch
While BlackBerry 10 has always allowed users to type in three languages simultaneously with auto-correct working for all three, the update allows users to switch languages quickly by using the comma key. Significant for Indian users, the update automatically changes the keyboard itself to Hindi when you type in a Hindi word such as ‘pranam‘. There is full keyboard support for Hindi on 10.2.1 and it is a delight to type in something like “Kya yaar where are you?” without a break since BlackBerry 10 auto-corrects in Hinglish and English simultaneously.

Cost management
A new option allows users to stay in control of data charges when roaming. Users can choose to download only message headers when roaming and opt to resize image attachments (original size, medium or small) to minimise data usage when roaming.

Calendar enhancements
Users can now go to a specific date on the calendar by tapping an icon on the top right of the screen and selecting a date. There’s a visual notification option to let meeting participants know you are running late. In any meeting entry the user can select the ‘I will be late’ option, and set the amount of time they are running late by and communicate it to all meeting participants. The new update also provides an option for instantly creating a follow-up meeting, and if users have the Cisco WebEx Meetings app installed, they can also schedule WebEx meetings through the Calendar app now.

Sharing
Sharing has been improved with BlackBerry 10 learning a user’s sharing pattern and adjusting the menu based on the frequency of past selection. When a user decides to share, the device now offers suggestions making it quicker for users to share. 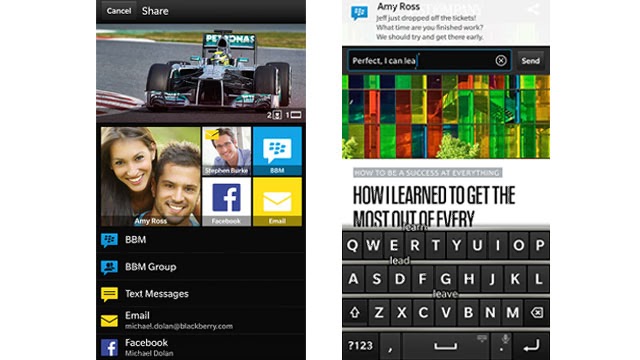 Simplified calling screen
There’s a better designed incoming call screen that lets users swipe to the left to answer, or swipe right to ignore a call. New intuitive icons allow users to instantly silence the call, or send a Reply Now response through BBM, SMS or email. The device now automatically identifies BBM contacts and provides a BBM reply-now response option to save on SMS charges.

Picture Password
Since passwords, PINs or patterns can be observed by others, there’s a new unlock system using a combination of a picture and a number (0-9), which users can place at a particular point on the image. When you try to unlock the phone, the picture will appear along with a grid of random numbers. To unlock, users have to drag the grid so the number they selected overlays the previously designated point on the image. It’s tough for an observer to figure out the specific number/point on the image combination since there is a grid of numbers.

Customizable Quick Settings Menu
While the dropdown Quick Settings menu was non-customisable earlier, users can now customise what appears as well as placement of tiles, which includes features such as being able to quickly change the brightness, toggle network connections, and access the new built-in flashlight option. For enterprise users on BES10, the settings menu also includes a toggle that lets users instantly switch between their Personal and Work perimeter.

Offline reading mode
Users can now save the current web page they’re on for later viewing, even if they are offline or without an Internet connection. 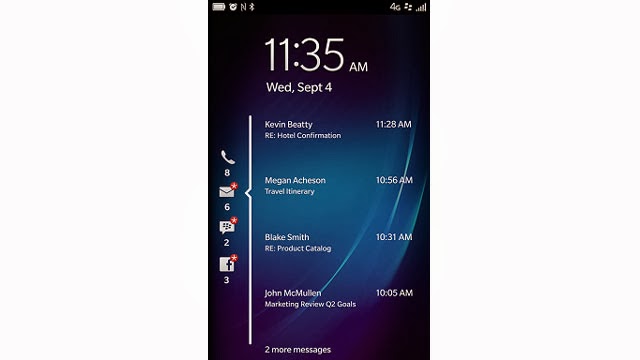 Actionable notifications on the lockscreen

Device and Battery Monitor
A new device monitor provides users with essential details on battery usage, the impact of installed apps on battery life and memory usage and storage, as well as CPU stats with some zingy graphs. The device monitor can be included in the Quick Settings toggles too.

FM Radio
FM Radio finally comes to BlackBerry 10 with the update unlocking the built-in FM radio — however, the Z10 doesn’t support FM Radio since its chipset doesn’t support FM radio. The feature will only be available on the Z30, Q5 and Q10.

Speed dialling for Q5/Q10
On the BlackBerry Q10 and Q5 that are physical QWERTY keyboard smartphones, users can assign speed dial keys to specific contacts and call them directly from the home screen. This is not a new feature and was available on legacy BlackBerry 7 smartphones but has finally come to BlackBerry 10.

Enterprise features
With BlackBerry’s renewed focus on the enterprise under CEO John Chen, this part has not been ignored in this update. When combined with BES10 version 10.2, enterprise customers will now gain additional security features and IT policies for when more granular control is required, such as for regulated industries, and for organisations that work with sensitive data.

In addition, the update brings remote search of emails older than 60 days, Bluetooth sharing through Android runtime, a new screen for video calls, Wi-Fi Direct and Miracast support. Clock App includes Accuweather information, while things have changed in the native weather app. There are now new native wallpapers to choose from as well.

We are very much eager to know what you experience on the new BlackBerry OS is. Do let us know how these changes have impacted the way you use your BB 10 device.