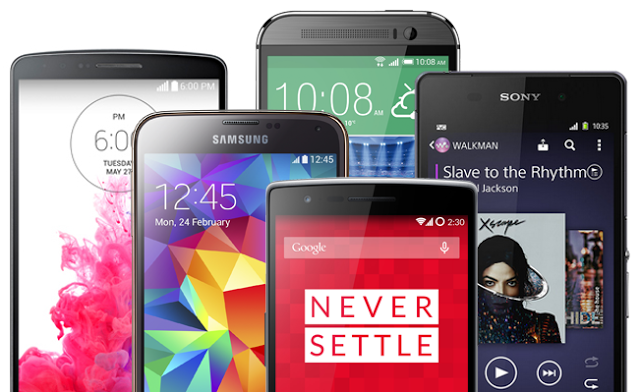 [Price: Free with in app purchases]
Alarm Anti Theft Screen Lock is a sort of hybrid between a security app and a lock screen app. When enabled, it puts an alarm on your device. Then those who try and fail to get passed the lock screen will be met with a loud, obnoxious alarm letting everyone around them know that the attempt to unlock the device has failed. It’s a little old school in terms of design which may clash with today’s more modern interfaces but it does help keep nosy people away.

[Price: Free]
C-Locker’s claim to fame is its unusual unlock styles. You can get the classic slide-to-unlock or the swipe-up-to-unlock methods if you prefer or you can use the bubble unlock which makes you pop bubbles to unlock the screen by “slicing” them with your finger. You can also change the wallpaper and it is totally free to use without any in app purchases. It’s minimal and simple so those looking for something more feature heavy should probably look elsewhere. Otherwise, tap the button to check it out. 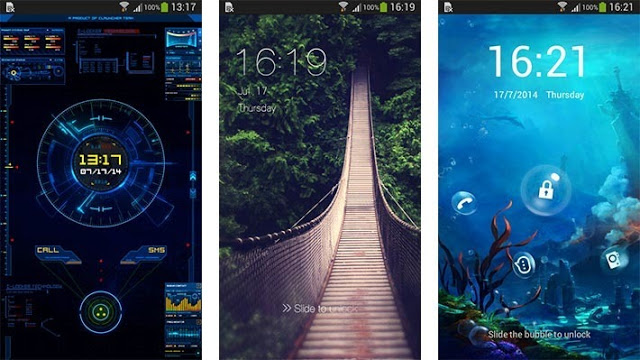 [Price: Free]
Cover Lock Screen is a contextual lock screen that tries to guess what you’ll need every time you turn on your device. It uses various data like your GPS location to see if you’re at home or at work along with the time of day to guess which apps you’ll need or want when you turn on your device. It’s still a work in progress (hence, beta) but it does have a few fun features like a unique app switching feature, a peek feature that lets you open apps from the lock screen, and smart settings based on your location and time of day. It’s also totally free.

[Price: Free]
Okay, so Dashclock Widget isn’t a lock screen replacement but it might as well be one. You can use Dashclock Widget as a widget on your home screen (on supported Android versions) to receive all sorts of data including time, weather, notifications, and a virtual ton of other things from Dashclock Widget extensions provided by other applications. It’s been long touted as a must-have application, especially if you’re on stock Android where the lock screen is a little bare by nature. It’s free so there’s no harm in trying it out. 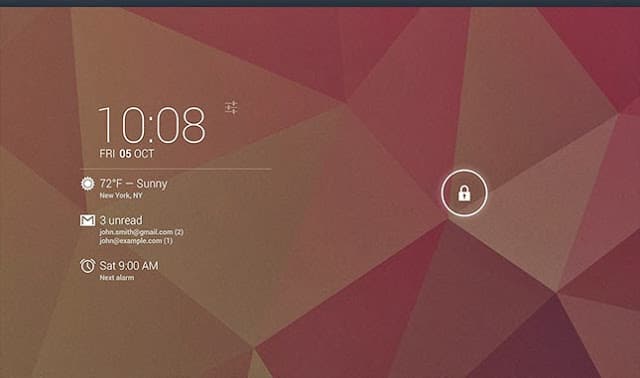 [Price: Free]
DIY Locker is a fun option because it allows you to design your own lock screen. You can use your own photos or images as well as those built into the app and you can change things like what goes on there, the colors, and the sizes. You can even design your own pattern or photo unlock which was actually pretty fun. It doesn’t have the diversity that something like GO Locker has but it’s still a solid option with good reviews and it’s free.

[Price: Free]
Dodol Locker is another free lock screen replacement app and this one comes as part of a package of other apps in the Dodol collection (not unlike GO Locker). It’s known for its many themes that allow you to customize your lock screen as you see fit. There are plenty of customization options but it still supports the basic stuff like pattern and PIN unlock. It is very simple in terms of pure functionality so this is mostly for people who want to customize how their lock screens look rather than act. 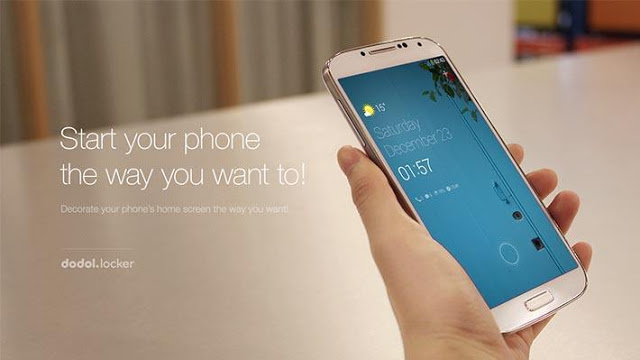 [Price: Free with in app purchases]
Echo Notification Lockscreen does pretty much what the title says it does. It’s a lock screen that focuses on delivering notifications to your lock screen not unlike Android Lollipop. It boasts a minimal and lightweight experience that shows you notifications, smart alerts, and security settings. It’s free to try and you can unlock the pro version for $1.99 as an in app purchase. It looks nice and aside from a few little things here and there, it’s generally well liked.

[Price: Free / $19.99]
GO Locker is by far the most popular lock screen replacement app on this list as it draws nearer and nearer to 100 million downloads. In the free version you get a huge number of themes that can mimic almost any device and plenty of unique ones, shortcuts to apps on the lock screen, and the ability to read messages from your lock screen. The paid version is a priced at $19.99 which is ostensibly ridiculous but if you decide you want it, you’ll get all of the paid themes (which is apparently a $900 value), and first dibs on new themes which you will always for free.

[Price: Free / $1.99]
Holo Locker is almost exactly what it says it is. It’s a lock screen app that acts and looks almost exactly like the stock Android lock screen. The free version is just the lock screen which is great if you want something super minimal and slick. The paid version gives you some functionality features like launching apps from the lock screen and more. Both versions are buggy for some people but overall it’s a solid offering. 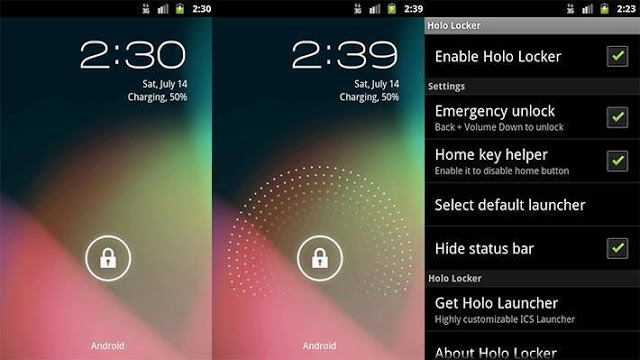 [Price: Free]
Joy Locker is truly for those who want something different. It uses the typical slide-to-unlock but it’s hidden inside of little games that you can play in the mean time. There are various little mini games like soccer, shooting a gun, playing with fish, and others. It’s great for people who have kids or just someone who wants to mess around for a few seconds while waiting in line. The games aren’t great but this is a lock screen and it’s also totally free.

[Price: Free]
Locker Master is among the more stylish lock screen replacement apps on this list. You can use things such as interactive live wallpapers and themes to put a truly creative spin on your lock screen. You can also do stuff like show animated weather and weather forecast, use iOS 7 style pattern and PIN unlock, display notifications, and it even comes with a built-in flashlight. It does have a bug here and there but it’s also totally free so it’s worth a shot.

[Price: Free]
LokLok is a fairly nifty and unique lock screen app. It’s essentially a picture-based messenger service that takes place entirely on your lock screen. The way it works is you take a picture and send it to a friend and they can respond with a picture of their own or they can alter yours and send it back. It can be a lot of fun and it can even be useful if you need to get information from someone quickly. It is also still in beta so you can expect there to be the occasional bug here and there.

[Price: Free]
MagicLocker is another lock screen replacement option with a lot of themes and a lot of features. You can find new themes by searching in the Google Play Store and there are a few of them that look good. You can also customize various parts of the lock screen and there are some advanced features like blocking the home key so it doesn’t wake up your device. It’s a fairly minimal lock screen with just enough options to make it entertaining and customizable but there are a few issues here and there so beware of those. 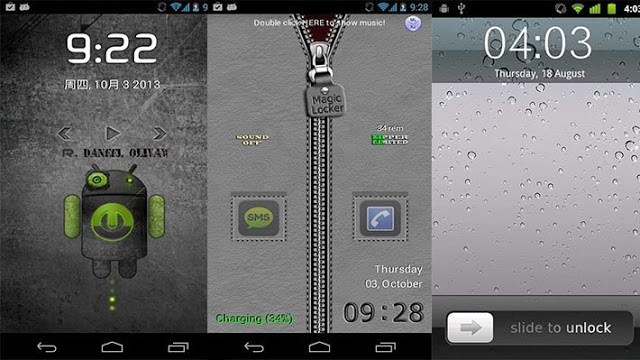 [Price: Free]
MixLocker is a free lock screen replacement app and it touts a high level of customization and theming. You can set it to show random wallpapers when you wake up the device and there are a number of unlocking patterns that you can use. It comes with built in shortcuts to the camera, flashlight, music player (of your choice), and other functions including themes. It’s definitely more of a modern lock screen and people who enjoy bold colors and minimal style should enjoy this one quite a bit. 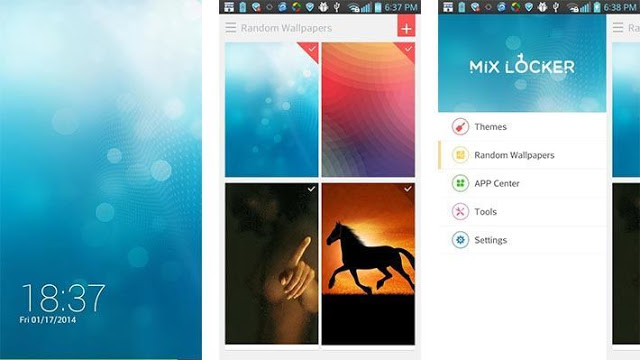 [Price: Free]
Next Lock Screen is Microsoft’s take on the Android lock screen. The quickest way to describe is if Dashclock Widget were, in fact, a lock screen replacement app. It shows you a lot of information on the lock screen and allows you to quickly do things like call people and reply to notifications. You can also quick launch apps and check calendar appointments. It is rather new and that means there are still some kinks to work out. That said, it’s still shaping up to be a solid lock screen option.

[Price: Free with in app purchases]
SlideLock Locker touts a cleaner replacement experience with a highly efficient way of dealing with notifications. On the lock screen, you slide right to unlock and slide left to access the camera quickly. You can also swipe right on notifications to open that app or swipe left to dismiss them. There is also Pebble Watch support for those who need that and it’ll wake the device up when you receive a notification so you can see it quickly without touching the device. It’s not for everyone but it looks nice and it’s highly functional. 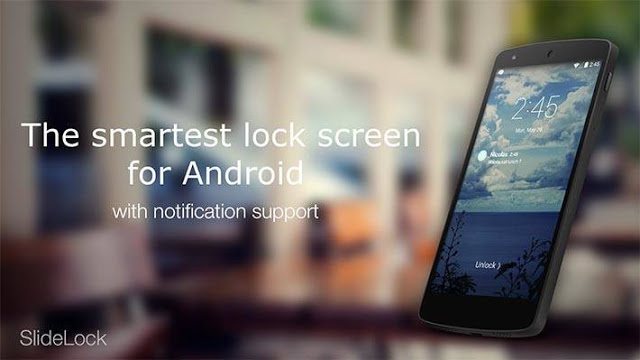 [Price: Free with in app purchases / $2.99]
Sparky Lock Screen is all about the eye candy. It cleverly disguises some pretty basic lock screen set ups around unique wallpapers to make it look like you’re interacting with them. For now it only supports smartphones and it is in the beta stages so you can expect some bugs. The big part of this is the artistic value because some of these lock screens look really cool and offer up something a little bit different than the competition. It isn’t very feature heavy which some will like and others will not but there is a free version that you can try before you buy.

[Price: $2.99]
Last on our list is WidgetLocker. This app was developed by the same people who brought us Nova Launcher and TeslaLED flashlight. Unfortunately they’ve also not updated this application since December of 2013. It features some of the more popular lock screens from the good old days including HTC’s rather underrated lock-pulling lock screen and the old Gingerbread lock screen. If you miss the old school way of doing things, this is about your best option to get those things back. However, due to it not being updated in a long time, chances are that any bugs you find will be permanent and we don’t know how this will act with Android 5.0 Lollipop. It’s likely this won’t be adorning this list next year but for now it’s still pretty good. 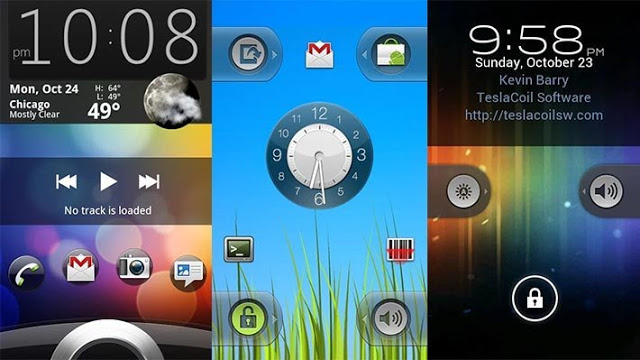 If we missed any awesome lock screen apps, let us know in the comments!