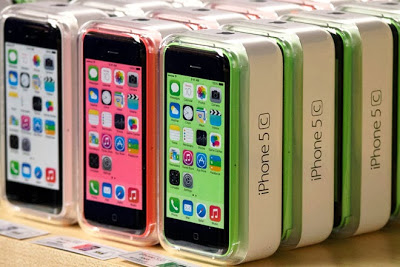 The much-awaited iPhone 5s rolled out in the US market on September 20 starting at a price of USD 649 plus taxes. It was immediately available in India through the grey channel at a whooping price of Rs.1 lakh and above.

Since the India launch was scheduled only in phase 3, (November 1) like always, many critics said that the hype would die down and assumed there wouldn’t be many takers for the premium smartphone by then. But they were wrong. There was a long queue of 400 plus people standing outside the “by invitation only” event held by Ingram Micro and Redington at Select City Walk, Saket today.

Despite rumours about the iPhone 5s Gold not coming to India, the company announced the availability of all three colour variants including the much sought after Gold colour variant at a price of Rs.53,500 for 16GB, Rs.62,500 for 32GB and Rs.71,500 for 64GB. Whether it is because of inflation, fluctuating exchange price or company pricing policy, this is the first time ever that the iPhone’s 16GB variant crossed the 50k mark.

One of the first people to walk out holding the iPhone 5s Gold at Saket, New Delhi was Shohaib Malik from Shahadra, East Delhi, who purchased the phone only to flaunt it. Scheduled to start selling at 5 PM, the counters opened around 4.15 PM. 16 counters had been set up. People coming out of the counters said within 15 minutes of the counter being opened, the iPhone 5S Gold was sold out.

Meenu Rana, a college student bought the white iPhone 5s as she could not get hold of the Gold. She was denied of the Gold at the counter. People were also willing to compromise for iPhone 5s silver when they are not getting the Gold.

Those without coupons were also able to buy the iPhone by entering through the back gate. Also, there were spots where iPhones were sold outside counters for cash from those wearing Apple t-shirts. They seemed to be part of the ground support team managing the event.

Gautam Sawhney, a Delhi based business executive managed to get hold of an 32GB iPhone Gold. He said he was an iPhone fan, currently using iPhone 5. He said that there were people was standing in the queue from morning.
Although the company said that only debit and credit cards would be accepted, people were buying phones for cash too. There were people coming out holding multiple phones instead of just one. But at around 5.20 pm, there was an announcement that the credit card machines are not working.

The iPhone 5c, which has replaced the iPhone 5 is now available at Rs.41,900, which is Rs.4,000 less than the iPhone 5 price for the 16GB variant.  And as expected, there weren’t many takers for the iPhone 5c. In fact, most of them said they were present at the event only to buy the iPhone 5s Gold.

Although only those with invites were able to buy the new iPhones today, they will be available to the general public from tomorrow onwards. Apple resellers say pre-booking started two weeks ago.

For iNvent, an Apple authorised reseller, pre-booking for the iPhone 5s was already in the access of 300 units. However, other resellers such as  FutureWorld and iWorld will be selling the smartphone on first-come basis. But in Delhi, a city full of “very important persons” there is bound to be a deluge of applications. Therefore, reservations are off the chart and chances of a walk-in buying the iPhone 5s are rather bleak. “The iPhone 5S is being sold to only those who have big contacts. For the general public, the gold variant is sold out,” said local resident Arvind Goyal, iPhone buyer.

For such customers, Reliance Communication has a bundling offer. Consumers will have to pay a specific amount per month for two years, which will include the iPhone cost and the monthly usage cost. These will be unlocked units and will work with any other carrier as well.

For those who say the iPhone craze in India has died, proof is in the pudding.