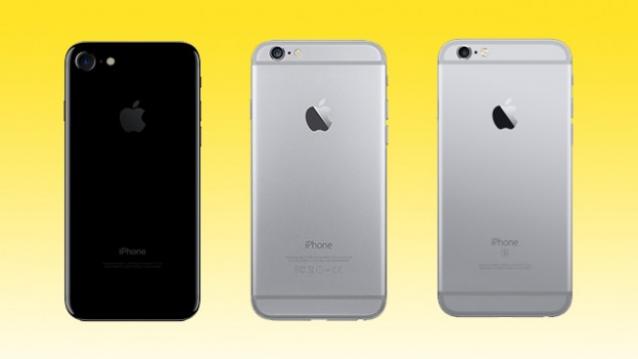 The iPhone 7 is here, finally! And, the new iPhone 7 as well as iPhone 7 Plus, come with features that have been doing rounds in the form of leaks and rumours for some time now. Now, there would be obvious comparisons on how it fares against the predecessors. We’ve put together the details of the iPhone 7, iPhone 6s and iPhone 6 to find out what’s new or rather the difference in terms of specifications.

Take a look at the comparison chart below:

The iPhone 7, is almost similar to the iPhone 6s when it comes to design, but Apple did show us a lengthy video about the new material and sturdiness. The removal of the 3.5mm jack and the antenna strips moved to the top are essentially the design changes. Also, the new look is more mirror glossy rather than matte metal (provided to go in for the 128 and 256GB versions in Jet Black). This time, Apple couldn’t boast of lighter or sleeker devices, as it is not!

Now, in terms of specs, it maintains the same display size and quality. However, the display is said to be 25 percent brighter than the 6s. It comes with a more powerful chip, the A10 Fusion, 40 percent faster than the A9. The battery life, though exact size not mentioned, is said to be two hours longer than the iPhone 6s. The water and dust resistant features take it a notch above the predecessors.

Making up for the missing 3.5mm headphone jack, Apple offers EarPods with a lightning connector along with a free adapter in the box. Apple has also unveiled its new AirPods wireless earphones (buy separately) that come with a 5 hour battery life and their own charging case. One of the biggest differentiating factor is the camera. The 12MP on iPhone 7 and 12MP dual on iPhone 7 Plus comes with support for f/1.8 aperture (f/1.8 and f/2.8), Optical Image Stabilisation, Quad-LED True Tone flash, 4K video recording and more.

The front camera is also spruced to 7MP with support for 1080p recording. The iPhone 7 has dropped the cringe-worthy 16GB unit, and finally we get 32GB, 128GB and 256GB variants, which is a great move.

All in all, there seems to be some significant changes over the previous models. A good upgrade for iPhone 6 users (not 6s owners). However, it’s the price that will play a huge role in the Indian market. The company has left us hanging with its Rs 60,000 onwards price statement, and we are yet to know the prices of other variants. The iPhone 7 is expected to arrive in India by 7 October as we near the Indian festive season, we might know the prices of the variants as we get closer to the launch.