Apple iPhone 6 vs Samsung Galaxy S6 vs HTC One M9: Here’s how the flagships stack up 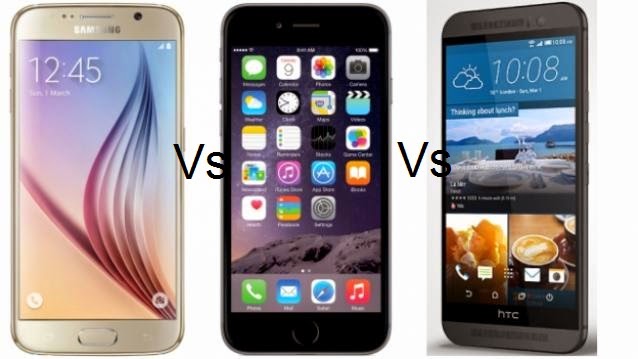 With the Mobile World Congress underway, all major smartphone makers barring Apple and Sony (this year) have something to show off. Samsung released two flagship devices – the Galaxy S6 and the Galaxy S6 Edge. While the Galaxy S6 Edge will be a newer variant of the Note Edge, it is the Galaxy S6 that is a phone that comes with a lot of expectations specially since Samsung had a terrible last year in terms of profits, at a time when Apple made record profits.

The comparison between the Samsung Galaxy S6 and the Apple iPhone 6 is but natural. We also addded the HTC One M9 to the mix as it also offers the best from HTC. Let us see how all three of them compare against each other.

In terms of display, the Samsung Galaxy S6 clearly seems to have an edge. Having a 2560 x 1440 pixel resolution on a 5.1-inch display gives it a staggering pixel density of 576ppi. The iPhone 6 at 327ppi and the HTC One M9 at 440ppi looks less in comparison. But to be fair, after 300ppi, the human eye cannot really distinguish between individual pixels. Sure, the Super AMOLED display will ensure a high contrast and sharp display, the iPhone 6’s display isn’t bad either. All three phones come with the best glass protection out there, but the iPhone 6 manages to stay the lightest.

All three devices will come with the latest operating systems and while the Samsung Galaxy S6 will come with its TouchWiz UI, initial reports point out the fact that Samsung hasn’t gone overboard with the skinning. HTC has added in the options to customise the look of your phone with the Themes feature in the Sense UI 7.0. In terms of clarity, the Apple iOS 8 may still have en edge, but we can tell about the user experience only after testing the Samsung and HTC devices. In terms of processing power, the Samsung Galaxy S6 and HTC One M9 look impressive with their latest octa-core processors and the iPhone 6 looks puny with its dual-core processor. But just taking that yardstick and calling the iPhone 6 a poor performer would be foolish. We have seen in our review how responsive the Apple iPhone 6 is despite not having the higher numbers in terms of processor cores or the RAM. The real test will be to see how power efficient the octa-core phones will turn out as compared to the iPhone 6 which has ample battery life. With the Galaxy S6, Samsung will for the first time offer a flagship device without a removable back or a microSD card slot. This may not be to everyone’s liking. But thanks to the stripped down TouchWiz UI, one can expect more user available space with the various SKUs of Samsung Galaxy S6. HTC One M9 has kept the storage card option open. In terms of processing speeds too, it is at par with the Galaxy S6, but we will have to run benchmarks to see how the HTC One M9 handles various tasks and games.

Camera is one area which has increased in importance over the years. We had tested the Apple iPhone 6’s camera and were thoroughly impressed with the output and the various creative things we could do with it such as slow motion video, hyperlapse video and so on. Samsung Note 4 and Galaxy S5 had higher MP count cameras, but they weren’t as impressive as the iPhone 6. So just going by the megapixel count here does not do justice to either of the phones. Although 4K recording feature as well as optical image stabilization will surely give the Samsung Galaxy S6 an edge over the other two phones.

In terms of battery capacity, the Apple iPhone 6 seems to offer the lowest battery capacity than the Samsung Galaxy S6 and the HTC One M9, but just like the processor and the camera features, battery life if something that can only be spoken about after conducting the real-life testing. To give an idea, the Apple iPhone 6 offered 14 hours of calls on the 3G network with the auto-brightness set on and location access switched off. When left on standby, it managed nearly six days without charging with mobile data and location access switched on. Those are good numbers. Of course the Galaxy Note 4, which we tested towards the end of the year, which came with a 3220mAh battery offered around a day and half of battery life on regular usage. So it is safe to assume that the Galaxy S6 and the HTC One M9 should be able to let us pull off one day of regular usage easily, but we can only confirm after testing the devices.

As can be seen from the charts above, the Samsung Galaxy S6 and HTC One M9 seem to offer more in terms of number of features and higher specifications. The Apple iPhone 6 has had a great run and by the time the Galaxy S6 and the One M9 will start selling, the iPhone 6 will already have completed over 6 months in existence. Also the Sony Xperia Z4 is expected to come out in April, so one will also have to take that phone into consideration. In terms of performance, both the new releases should have their basics in place and offer speedy performances. But how fast as compared to the iPhone 6 can only be talked about after testing those devices.

In terms of design, the Samsung Galaxy S6 has certainly come up with something impressive and will surely be at par with the iPhone 6 thanks to the metallic unibody design. The HTC One M9 hasn’t really improved on the design of the One M8, so that can be off-putting for a lot of potential buyers.

Pricing of the devices will be a major game changer. Going by the price points of the HTC Desire 820 and Desire EYE, it seems like HTC will price the One M9 competitively as well. Samsung Galaxy S6 will easily cross Rs 50,000 as that has been its initial pricing for most of its flagship devices. But if Samsung can offer a more competitive price point for the metal body phone, it can be a game changing flagship for it, unlike the Galaxy S5 which was disappointing.