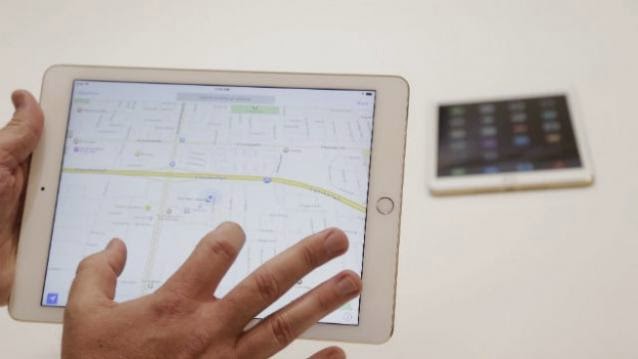 Apple iPad Air 2 is seen during the launch event. AP

Apple has launched the iPad Air 2, iPad mini 3 and the devices will go on sale later next week in 29 countries (India is not on the list) while pre-orders open online on 17 October (which is today). So what are the key features of the new iPads? We take a quick look:

Design and Screen: Given that this one is called the iPad Air 2, the design is the same as we saw in the first iPad Air. Unlike the iPad 1, 2, 3, 4 design series where it was much wider, the iPad Air series follows the design of the iPad mini. The iPad Air doesn’t have the bulge in the back that the original iPad had.

As far as screen goes, it is a disappointment. Apple has kept the screen size at 9.7-inches for the iPad Air 2 with a 2048×1536 resolution at 264 pixels per inch (ppi). Apple has, however, introduced an anti-reflective coating on the tablet (the same as the iPhone) to reduce reflections on the tablet by 56 percent. If users were hoping that the iPad Air 2 would have a sharper screen, that hasn’t changed. iPad mini 3’s screen is also at 7.9-inches with a 2048×1536 resolution at 326 pixels per inch (ppi). 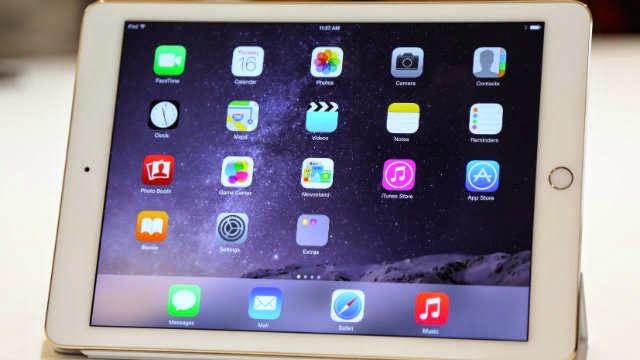 The new iPad is seen during the launch event. Reuters

As far as the iPad mini 3 is concerned, the weight and dimensions have remained the same.

Processor and Memory options: As it was expected, the iPad Air 2 comes with the A8 64-bit architecture processor along with the M8 motion co-processor. For the iPad mini 3, Apple has kept the A7 processor with M7 motion co-processor which isn’t an improvement at all from the earlier version.
According to Apple, the A8 chip on the iPad Air 2 delivers a 40 percent improvement in CPU performance and 2.5 times the graphics performance of the iPad Air, and still delivers the promised 10-hour battery life. iPad Air 2 also includes an all-new barometer which senses air pressure to provide relative elevation. This is not included in the iPad mini 3.

Camera: Apple has finally improved the camera on the iPad Air by introducing an 8 megapixel rear (or as Apple calls it iSight) camera although it has kept front camera at 1.2 megapixels which is disappointing. As far as camera improvements on the iPad Air 2 go users can now take panoramic shots, shoot time-lapse video, slo-mo video and 1080p HD video.

According to Apple, the FaceTime HD camera now captures over 80 percent more light than iPad Air’s camera, and features burst mode as well as HDR stills and video.

Sadly, the iPad mini 3 camera hasn’t changed much and remains the same as the iPad mini 2.
Touch ID and Apple Pay: Essentially this is the biggest plus to the iPad Air 2 and the iPad mini 3 as both come with the Touch ID fingerprint scanner which we’ve seen on the iPhone 5s, iPhone 6 and iPhone 6 Plus.

Touch ID will allow users to use store their fingerprint on their iPad and use that to make transactions on the Apple App Store. Once third-party apps also use the Touch ID features, you can use this feature on other apps as well.

As far as Apple Pay is concerned, it will be available only in the US and essentially allows users to replace their credit card with their device to make actual payments.

Wifi and other connectivity: Thee iPad Air 2 has WiFi 802.11ac Wi-Fi with Multiple-In-Multiple-Out (MIMO) technology and according to Apple, 2.8 times the Wi-Fi performance of iPad Air at data rates up to 866 Mbps.

iPad Air 2 with cellular connectivity has more LTE bands and comes with expanded LTE for up to 50 percent faster cellular connections, plus support for other fast cellular technology around the world (DC-HSDPA, HSPA+). With the iPad mini 3, the WiFi and LTE specs are the same.

iPad Air 2 and iPad mini 3 is coming in Gold colour as well along with Space Grey and silver.

The verdict: Where the iPad Air 2 is concerned, it feels seriously underwhelming. Who didn’t see the Touch ID and a ‘thinner’ iPad coming? The improved camera resolution is a great plus, but other than that, the rest of the updates in the iPad Air 2 don’t really scream innovation. With the iPad mini 3, nothing has changed other than the Touch ID.

The good news is that with these two launches, the iPad Air and iPad mini 2 will get a price cut.