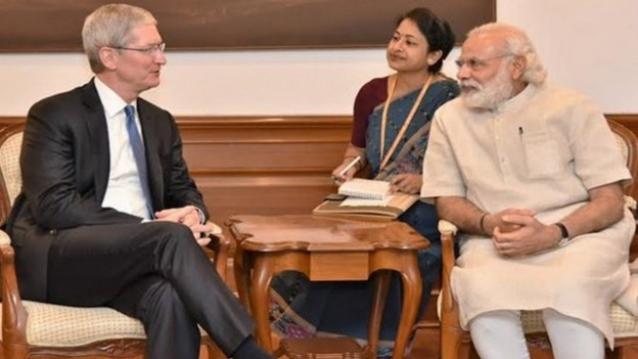 He came. He saw. But Apple CEO Tim Cook is yet to get the biggest bite into the huge consumer base in the country, of which every tech player — from China to Korea to Taiwan — is trying to get a bigger share. If we look at why, in the first place, Cook came to India in this sweltering heat, it would not be wrong to interprete his first visit to the country as an exploratory mission rather than as one with a clear-cut investment agenda.

First, during his four-day “encrypted” trip Cook did not specify the amount the $233 billion-rich Apple would invest in India, unlike in China where it announced to invest $1 billion in Chinese ride-hailing service Didi Chuxing — a rival to Uber. The Cupertino, California-based tech giant announced its first development centre in Hyderabad to work on Apple Maps. Earlier, Cook revealed an app design and development centre in Bengaluru that will support the Indian developers creating mobile apps for its iOS mobile platform.

Both announcements were grand but came without any investment figures.

In his much-awaited meeting with Prime Minister Narendra Modi, the 55-year-old Apple head stressed the possibilities of manufacturing and retailing Apple devices in the country. Again, nothing concrete was given out except “sharing Apple’s future plans for India” and appreciation for “the breadth of young talent in the country”. While Apple iPhones’ sales grew nearly 56 percent in India in the second quarter of this year from the year ago period, data compiled by market research firm CounterPoint Technology revealed that south Korean smartphone maker Samsung sold in India more phones than Apple in the premium category (Rs.30,000 and above) in 2015-16.

According to the report, Samsung’s share in the premium smartphone segment was 47 percent while Apple came second at 45 percent. Looking pretty aware of these facts, Cook played his future cards as he met some key telecom players like Sunil Mittal, chairman of Bharti Airtel, one of India’s leading telecommunication companies which was the first to launch 4G in India and is set to offer the service countrywide.

Bullish on India’s upcoming 4G revolution, Cook told an Indian TV channel that 4G is critical for India’s progress — thus setting up the roadmap for a possible alliance with some big players to help Apple open more retail stores in the country. He also revealed his plans to soon bring to India Apple Pay — a mobile payment and digital wallet service that lets users make payments through Apple devices, a convenient way to make cashless payments.

Amid all the media hype, Apple’s long-standing query to allow it to import and sell refurbished iPhones at a cheaper price in India was almost left unanswered at the highest levels. Rather, Prime Minister Narendra Modi reportedly asked Cook to come and manufacture iPhones here. So, apart from seeking blessings from Ganesha at Mumbai’s famous Siddhivinayak temple, meeting Bollywood biggies at the dinner superstar Shah Rukh Khan hosted at his residence ‘Mannat’, and watching an Indian Premier League (IPL) cricket match at Kanpur, what did Cook finally garner in these four days?

“I will call it a great exploration effort, and do not see any immediate results. Yes, I find Cook’s meeting with the Reliance Jio team the most significant one as they are the biggest 4G player in the country at the moment,” says Vishal Tripathi, research director at global market consultancy firm Gartner. “I won’t call his visit a ‘wow factor’ at this moment. Even for the Maps facility, Apple has outsourced it to a Noida-based firm,” Tripathi told IANS.

For the Maps development centre, Apple has partnered with Noida-based RMSI, a leading IT services player that offers GIS, analytics and software services. According to Faisal Kawoosa, lead analyst with CyberMedia Research (CMR), a nod to import and sell refurbished iPhones at a cheaper price would have had put Apple in a very advantageous position in the country. “At a time when its revenues have taken a hit globally, selling its products in mid- and low-price segment would give the company an upper hand,” he told IANS.

So, a fullfledged Apple manufacturing unit in India appears quite far off at the moment. “As of now, we understand it [the visit] was more of bringing research and development into the country,” Kawoosa added. So, this then is the reality: Philosophically, Cook has taken with him a sense of belonging and a commitment to be in the country for the next thousand years. But on the material level, long wait must follow till he returns to India with a big announcement — in all probability during a cool, bearable weather.