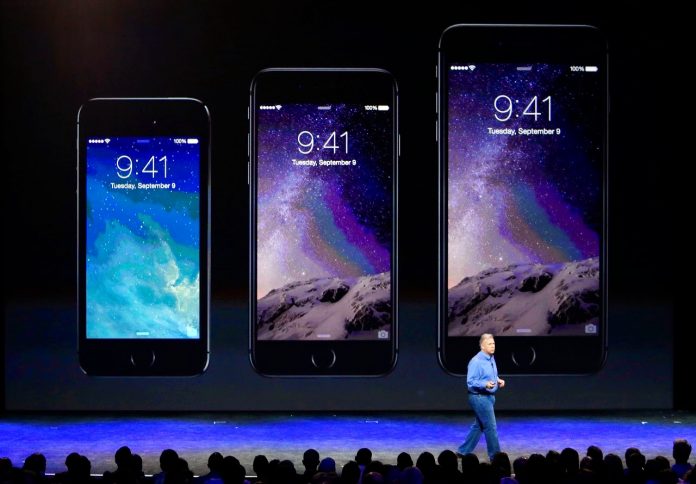 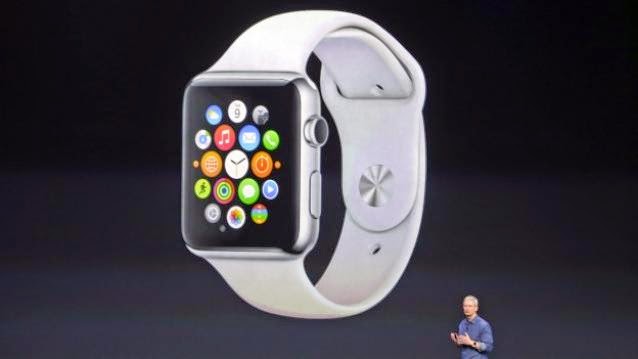 For the first time in years, Apple’s iPhones aren’t the star of the show. Apple unveiled a smartwatch on Tuesday, a wearable device that marks the company’s first major entry in a new product category since the iPad’s debut in 2010.

The move is significant because of recent questions about whether Apple still has a knack for innovating following the 2011 death of co-founder Steve Jobs.

The device’s introduction upstaged the company’s two new, larger iPhones, which won’t just have bigger screens; they’ll have a new, horizontal viewing mode to take advantage of the larger display.

The iPhone 6 will have a screen measuring 4.7 inches, while the iPhone 6 Plus will be 5.5 inches. In both cases, app developers will be able to design apps that can be viewed differently when the phone is held horizontally.

Apple is turning to the past as it lays out its future. The company is holding the event at the Flint Center for the Performing Arts, the same venue where Jobs unveiled the industry-shifting Mac computer 25 years ago. The Cupertino, California, venue is near Apple’s headquarters.

As for the iPhones, which still represent the main source of Apple’s profits, larger models should help the company compete with Android devices.

LARGER iPHONES
Now, Apple is increasing that. The iPhone 6 will have a 4.7-inch screen, while the iPhone 6 Plus will be 5.5 inches. The screen resolution on the Plus version will be sharper than previous iPhones, at 401 pixels per inch rather than 326.

With the larger screen comes a new horizontal view of the home screen. Usually, icons are stacked vertically, even when the phone is turned horizontally. App developers will also have new tools to rearrange their content to take advantage of that larger screen.

The new phones aren’t as big as Samsung’s latest flagship phones — 5.1 inches for the Galaxy S5 and 5.7 inches for the Note 4 — but they will be large enough to neutralize a key advantage Samsung and other Android manufacturers have had.

Notably, Samsung’s Note phone isn’t getting bigger this year. Last year’s Note 3 was 5.7 inches. Instead, Samsung is emphasizing other hardware features, such as a sharper screen. It’s also releasing a model with a curved edge to display weather, time and other information on the side of the phone.

Apple says the new phones will be faster and have better battery life than previous versions. The phones will also have a new sensor, the barometer, to estimate how much you’ve climbed stairs, not just how far you’ve walked or run.

Of course, some people still use their phones to actually make calls. When there’s poor cellular reception, people will be able to make regular calls over Wi-Fi. The handoff between the two networks will be seamless. In the U.S., this feature will initially be available through T-Mobile.

The resolution on the camera is staying at 8 megapixels, while rival Android and Windows phones have been boosting that. The S5, for instance, is at 16 megapixels. However, the megapixel count is only one factor in what makes a good photo. Apple says it is putting in new sensors for better shots. 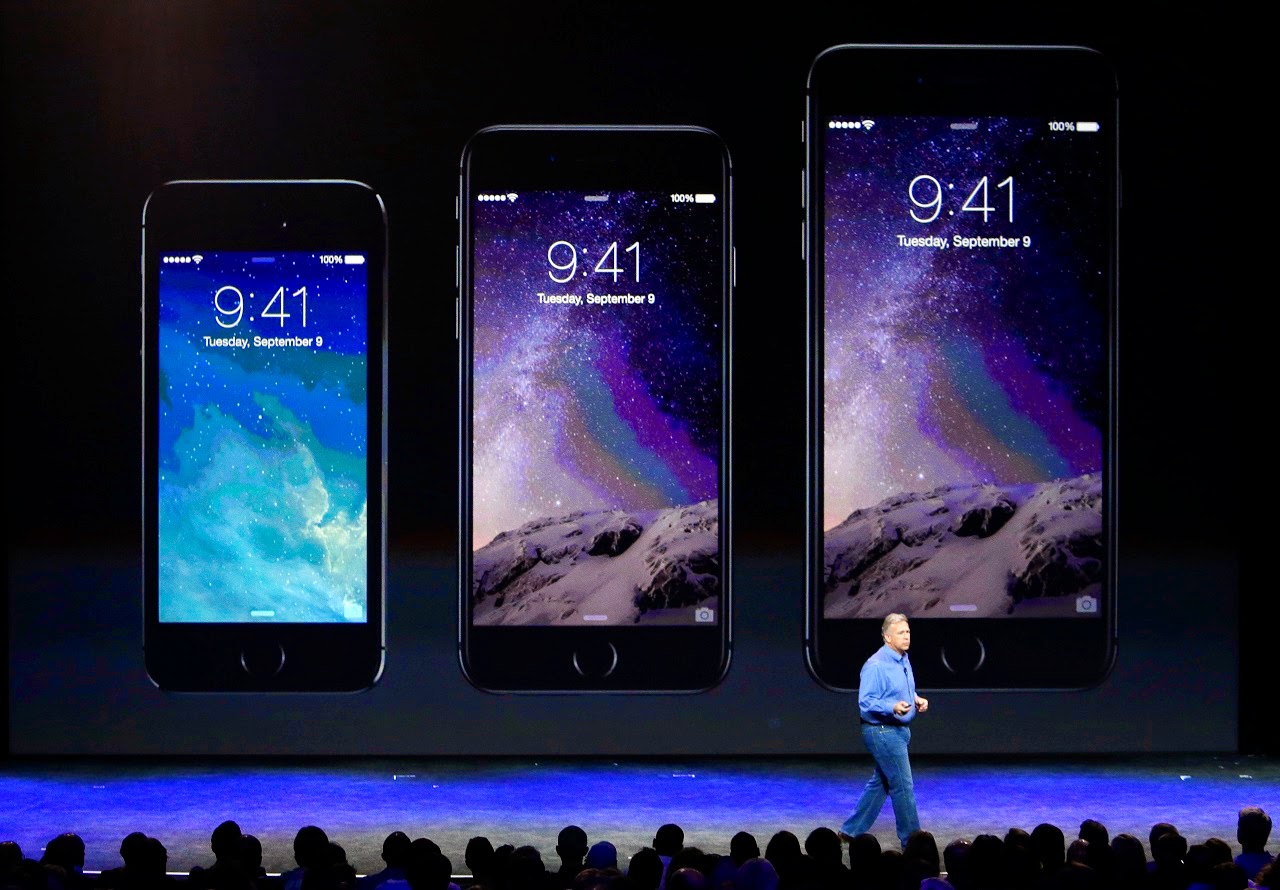 Apple is also improving a slow-motion video feature by allowing even slower shots. The camera will be able to take 240 frames per second, double what’s in last year’s iPhone 5s. Normally, video is at 60 frames per second.

The new phones will start shipping in the U.S. on Sept. 19, with advance orders to begin this Friday. Starting prices will be comparable to those in the past — $199 with a two-year contract for the iPhone 6 with 16 gigabytes of storage.

However, the step-up models will have double the memory than before — $299 for 64 gigabytes and $399 for 128 gigabytes. The iPhone 6 Plus phones will cost $100 more at each configuration.

MOBILE PAYMENTS
Apple is calling its new payment system Apple Pay. You’ll be able to use your phone’s camera to capture a photo of your card. Apple will verify it behind the scenes and add it to your phone’s Passbook account so you can make payments at a retailer. Apple announced several merchants that will accept this system, including Macy’s, Whole Foods, Walgreens and Disney stores — and of course, Apple stores.

Many companies have tried to push mobile payment services, but none has caught on widely. Cook says that’s because the business models have been centered around companies’ self-interest instead of the user experience. The latter, Cook says, is “exactly what Apple does best.”
For security, the card number is stored only on the device. Each time you pay, a one-time card number is created to make the transaction. 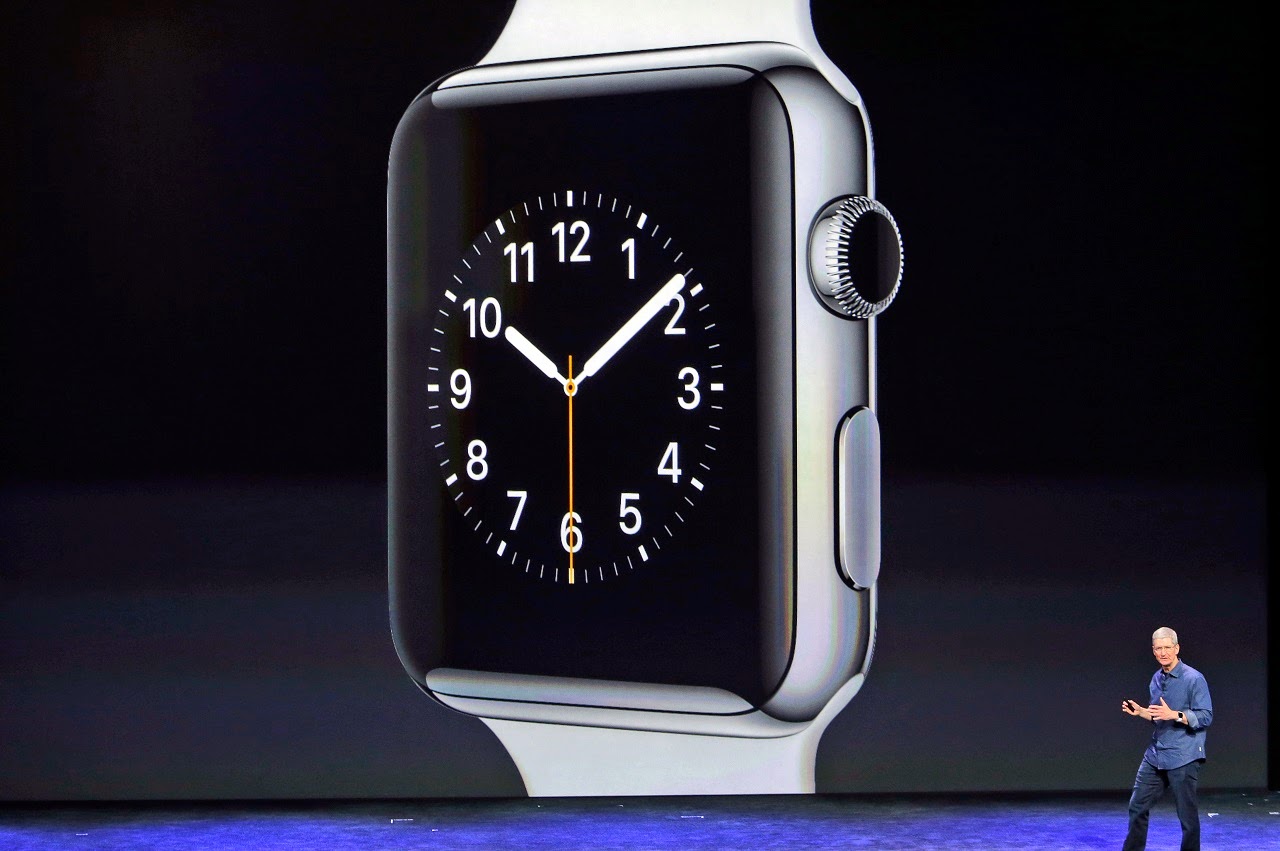 APPLE WATCH
Apple’s new wearable device has been dubbed the iWatch. It’s likely to be a computerized watch or bracelet to help people monitor health, manage homes and even buy merchandise.

Consumer electronics companies have yet to demonstrate a compelling need for smartwatches, while bracelets have largely been niche products aimed at tracking fitness activities. Apple’s device is expected to do more and do it well.

Consider the company’s track record: Music players, smartphones and tablet computers existed long before Apple made its own versions. But they weren’t mainstream or popular until the iPod, iPhone and iPad came along. Under Jobs, Apple made those products easy and fun to use.

Apple may use Tuesday’s event merely to announce the wearable product, along with the price. There’s speculation that the device wouldn’t be available until early next year, though Apple was expected to start taking advance orders during the holiday shopping season.

NEW SOFTWARE
Though much of the attention has been on new gadgets, the software powering those gadgets is getting its annual refresh. Apple considers iOS 8 to be its biggest update since the introduction of the app store in 2008.

Existing iPhone and iPad users will be eligible for the free upgrade, too. Apple takes pride in pushing existing customers to the latest software, allowing app developers to incorporate new features without worrying about abandoning existing users. With Android, many recent phones can’t be upgraded right away because of restrictions placed by manufacturers and wireless carriers.

The new iOS software will also let people do more things without jumping from app to app. For example, if a text message comes in as you’re composing an email, you’ll be able to pull down the text from the top edge and send a reply, all without leaving the email app.

A new keyboard aims to predict what you’re about to type, going beyond standard spell-checking. You can install keyboards from outside parties, too, something Android already allows.

In fact, Apple is opening up more of its features to outside developers than in the past. The fingerprint sensor on iPhones won’t be restricted to Apple’s own services, for instance.

The new software will be available to existing users on Sept. 17.

HOME AND HEALTH
Apple is rolling out the HomeKit and HealthKit systems. The idea is to turn Apple’s products into a suite of digital servants that do everything from monitoring a person’s eating habits and exercise routines to turning on the coffee maker in the morning.

Again, Apple isn’t first in offering home and health monitoring systems. But consumers haven’t rushed to buy those systems partly because products from various manufacturers don’t always work with one another. With HomeKit and HealthKit, Apple is seeking to create some unity — with Apple’s devices serving as a hub.