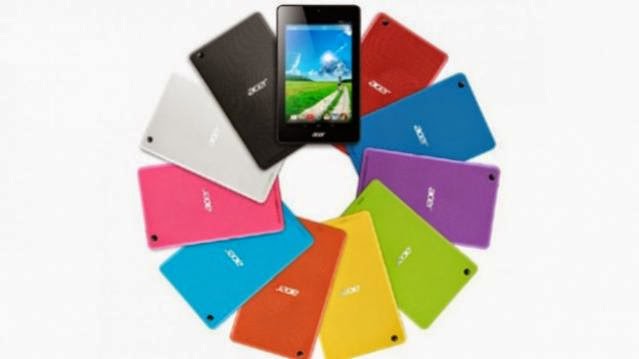 Along with its first fitness-focussed Liquid Leap smartwatch, Acer has pulled the wraps off its latest range of notebooks and tablets. These include E14 and E15, and a Aspire Switch 10 hybrid, as well as two new tablets – Iconia Tab 7 and Iconia One 7.

The Aspire Switch 10 is a Windows 8.1-based ‘four-position 2-in-1′ laptop. The hybrid device lets users switch between laptop and notebook modes. It comes with a detachable 10.1-inch, zero-gap IPS HD display. Some other specs include Intel Bay Trail intenals, 2GB RAM and 64GB storage with optional 500GB.

The company has also added the E14 and E15 – featuring 14-inch and 15-inch displays – to its E-series of notebooks with optional touchscreens and six colour versions. The device is said to have up to seven hours of battery life and a gesture-controlled touchpad. The E14 and E15 will be available at a starting price of $299 (approximately Rs 18,000) in Asia and also other select regions by June. The company has not announced the internal specs of the laptops, though we expect it to have Haswell processors.

Acer has also announced the new Iconia Tab 7, an Android tablet with voice-calling functionality. It features an HD IPS display, quad-core processor, Intel dual-core CPU and dual speakers. The Iconia Tab 7 will be available in mid-May in Europe and Asia starting at €149 (approximately Rs 12,400).

The next in the lineup is the Iconia One 7, a 7-inch tablet with support for 3G and voice calling. The One 7 tablet runs Android 4.2 Jelly Bean, but is said to be upgradeable to Android 4.4 KitKat. Under the hood, it is powered by a 1.6GHz dual-core Intel Atom Z2560 processor coupled with 1GB of RAM. It will be available at a starting price of EUR 139 (approximately Rs 11,500) in Europe, Middle East and Africa by mid of next month.