24 hours with the Samsung Galaxy Tab S 8.4: Still in awe of that amazing display 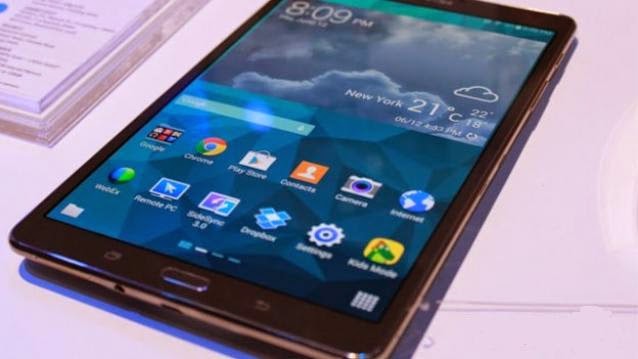 The Galaxy Tab S and its brilliant display

Samsung announced its rivals to the iPad Air and the iPad Mini with Retina display in the form of the Galaxy Tab S 10.5 and Galaxy Tab S 8.4 in New York last month. We got our hands on the 8.4-inch version of the device and here’s what it’s like to use, after just 24 hours with the tablet.

One of the first things that steals your attention is the super-sharp screen. And it manages to hold your attention for the next few hours, days or months, we don’t know – it’s that beautiful. I was awed (still am) at the display. The Super AMOLED screen the key selling point of the Tab S, which makes sense as the display eases out most tasks – reading, web browsing, gaming, watching videos and everything anyone would want to buy a tablet for.

Much of my time was spent reading and watching videos on the Tab S on the first day, and I’ve enjoyed both particularly because of the screen. There are speakers on the bottom, top and front of the device, which dhine when you’re watching videos or playing games on the tablet. It’s loud and vibrant and nowhere close to the tinny sound most tablets produce.

For an 8.4-inch tablet, I was surprised at how lightweight the Tab S is. Samsung claims it weighs just 298 g – that’s about the weight of a spiral notebook. It’s also very slim, so I can comfortably carry it around one-handed while I’m travelling or slip it inside my handbag when I don’t need it.

It’s only been a day and I’ve been pretty careless with the device already. It does not have any protective covering and I store it in my handbag that also has an umbrella and a water bottle stashed in. Luckily, the Tab S is still in perfect shape with no scratches (yet!), so it looks like a device that won’t need too much handling care.

My initial impressions of the Galaxy Tab S are great. With a splendid display, great ergonomics and slick interface, it checks all the right boxes to be a good choice of tablet, but we haven’t even began putting it to the test yet.  For a more detailed review and a final verdict of the Galaxy Tab S, stay tuned to our website as we’ll be putting it through stringent tests to reveal any shortcomings.