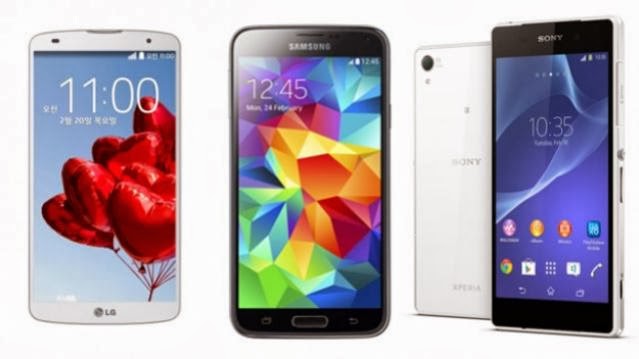 Samsung yesterday unveiled the Samsung Galaxy S5 smartphone at the Mobile World Congress in Barcelona. The smartphone comes with some new features such as a 16 megapixel camera, a heart-rate monitor, and hybrid auto-focus to name a few. You can check out the full detailed list on our site here.

So how does Samsung’s new premium device compare to the other latest launches in the market such as the LG G Pro 2 and Sony Xperia Z2? We take a quick look:

Screen: The Samsung Galaxy S5 has a 5.1-inch upgrade to the year older Galaxy S4 and sports a full HD screen with the same Super AMOLED panel. All those rumours of a QHD screen with 2560×1440 pixel resolution were not true. In terms of screen, Samsung hasn’t done anything that would excite users.

Design: In terms of design, the S5 still has the plastic body, which not everybody is fond of. There are no major visible improvements on the front of the device, but the home button also functions as a finger-print reader. Samsung has said it will launch a metal variant of the S5 as well. On the rear-side, just below the camera module, you have a heart-rate monitor.

The LG G Pro 2 while it is bigger in size, comes with an extra slim bezel of 3.3mm.  Sony’s Xperia Z2 doesn’t offer anything radically new in terms of design and looks pretty much like the Z1.

However, the advantage that both Samsung and Sony’s smartphones have are that they are dust and water-resistant, while the LG G Pro 2 is not.

Processor and memory: Samsung’s Galaxy S5 has a 2.5GHz Snapdragon 800 quad-core SoC with 2GB RAM. This is disappointing since most people were expecting Samsung to launch the new Exynos processor with 3GB RAM.

So, here the Samsung Galaxy S5  is outdone by the competitors, which both have 3GB RAM.

Camera: Samsung’s Galaxy S5 has a 16MP camera with improved menu and user interface. It claims to have an autofocus speed of 0.3 secs and an advanced High Dynamic Range (HDR) mode. The Samsung S5 rear camera will feature phase-detect and contrast detect AF, which is generally seen on high end cameras. On the front there is a 2.1MP camera. The new Selective Focus Feature allows users to focus on a specific area of an object while simultaneously blurring out the background. It also comes with a post-capture refocus feature. Another interesting feature is its ability to shoot 4K video, although you will need to watch the full res video on a 4K TV.

The LG G Pro 2 has the lowest res camera at 13 megapixels with optical image stabilization, and a 2.1-megapixel front-facing camera. However like the other two smartphones, LG G Pro 2 is also able to record 4K video with stabilization and 120fps slow-motion footage in HD.

If megapixels are what you crave for, then go for the Xperia Z2, else, all three cameras sound pretty solid.

Battery and OS: Samsung has offered a big new boost in this field,  and it packs in a 2800mAh battery with a talk time of 21 hrs. A new feature called the Ultra Power Saving mode, claims to give you a 24-hour battery even when your phone shows the battery capacity at 10 percent.

The LG G Pro 2 has a 3,200mAh removable battery for which the company hasn’t specified the time. The Xperia Z2′s battery is a 3000 mAh and Sony is promising talktime upto up to 830 hours. All three smartphones run Android 4.4.

Other features: Samsung’s smartphone has a couple of new features which makes the S5 stand out. It has a finger-print sensor and can recognise three separate finger prints and it takes eight swipes to register, instead of holding down on the home/fingerprint scanner button. You can unlock the phone using finger-print recognition and can even authorise PayPal to make payments.

Samsung has also introduced a heart-rate monitor under the camera module. The new S Health 3.0 in the Galaxy S5 provides a personal fitness tracker with tools such as pedometer, diet and exercise records and a new built-in heart rate monitor.

While the Sony Xperia Z2 doesn’t have anything special for fitness freaks, it does have digital noise-cancelling capabilities. Sony is promising up to 98 percent reduction in ambient noise when used with its MDR NC31EM headset. The Sony Xperia Z2 is also compatible with the SmartBand SWR10 launched by Sony.

The LG G Pro 2 has a Knock Code feature which allows owners to power on and unlock their G Pro 2 smartphones in one easy step by tapping their screens using one of 86,367 “knock” combinations. The smartphone also has a flash on the front for selfies and the smartphone also includes a 1-watt speaker system, which is a first for smartphones.

Pricing and availability : The Samsung and Sony smartphones should be available across the world globally by March and should be out in India by April. There is no word on official pricing yet, but it would be safe to say that these phones will be in the above Rs 40k bracket.

The LG G Pro 2′s global availability is not yet known as the phone has only been launched in Korea for now.

Conclusion: All three smartphones are pretty similar in specs, except that Samsung has jazzed up the S5 with a fingerprint scanner and a heart-rate monitor. Eventually, the deciding factor is likely to be pricing, unless you simply ‘must have’ the features on the S5 device.