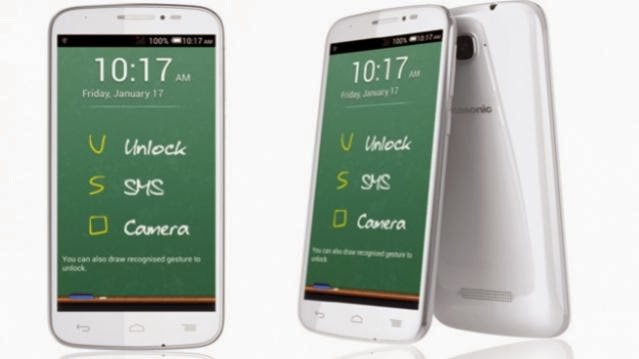 Panasonic has launched a mid-range smartphone that hopes to capitalise on a bunch of software features to carve out some success in the Indian market. The Panasonic P31 will be available for a market operating price of for Rs 11,990 from the second week of March.

The company had been heavily teasing the P31 in the run-up to the launch, with each teaser focussing on a particular software feature. Panasonic P31 has a 5-inch display with a disappointing FWVGA resolution (480×854 pixels). We would have hoped for at least a qHD display at this size, but hopefully Panasonic has calibrated the display well enough to eliminate pixilation. The display has an oleophobic coating to prevent oil smudges.

While the phone itself looks rather generic, Panasonic says it has used a Heat-Sink design which lets the phone remain cool even when the CPU is running at full tilt. The glossy white body does not fill us with confidence about how well you can grip it, though; there’s also a ‘Bluish-Black’ model.

There’s a quad-core 1.3GHz processor under the hood, but Panasonic has not mentioned who the chipset maker is. It’s likely to be a MediaTek chipset. Like most low-cost phones released in India these days, the P31 runs Android 4.2.2 Jelly Bean, in an age of Android KitKat. There’s an 8MP camera on the back with an LED flash, capable of recording full HD videos, and there’s a VGA camera on the front. The 2000mAh battery should ideally last the whole day considering the low-res display. Rated battery life is 13 hours (2G) and 9 hours (3G) of talk time and a standby time of 650 hours (2G) and 600 hours (3G).

Panasonic has turned the attention from the hardware to software with the P31. It is the first phone to feature the company’s “Play Life” UI with four core features. With Gesture Play, users can draw to unlock the phone and  even get to specific apps by using pre-assigned gestures . Pop-I Player lets you watch a video over any other screen, just like Samsung, LG and Micromax phones. A Music Café app helps in library management and adds additional audio tweaks, while Ultimate Saver helps you manage your battery use and can be tweaked to prolong battery life in emergencies.