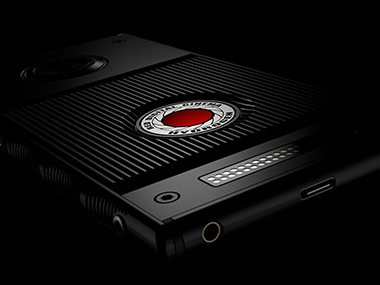 If you know anything about cameras, and even if you don’t, you must have heard of RED at some point. RED is a company that makes some of the highest-rated video cameras and sensors around.

Basically, if you’re looking for the best, highest resolution sensor around for whatever project you’re working on and you have a tonne of change (perhaps literally), you might be able to pick up something like the award winning RED HELIUM 8K S35 WEAPON Brain (RED speak for sensor module) that can record 8K videos at 60 frames per second.

Clearly, RED has quite a pedigree for making top-of-the-line professional hardware. Its hardware has been used in movies like The Martian, and even in visually splendid TV series like Better Call Saul.

The company has never made a product for the average joe, until recently anyway.

The holographic display is a 5.7-inch unit which RED claims can give you a glassless 3D experience and even let you “look around” objects in a scene. The Nintendo 3D series of handheld consoles has offered mainstream glassless 3D technology for many years now, and this is certainly not the first time we’ve heard of “revolutionary” 3D technology. That said, this is RED we’re talking about, and judging by its pedigree we can expect something spectacular.

YouTuber MKBHD rated an invite to RED’s HQ and got to try the holographic display for himself. He also managed to get hands-on time with a non-functioning prototype of the unit, and he made a video about it.

As MKBHD points out in the video, the device is quite large and thick, but seems well-protected and easy to grip. The edges are contoured to allow for better grip and you even find Kevlar on the back surface (the same material you’d find in a bullet proof vest).

A power button is placed on the right side of the device and it doubles as a fingerprint reader. Towards the bottom on the same side you’ll find a dedicated button for the camera. Volume buttons are on the left. Connectivity happens via USB-C, which is at the bottom, residing alongside a 3.5 mm headphone jack.

The back of the phone also features several contact points at the bottom. These will be used to attach various modules to the phone.

The speakers seem to be front-firing.

The details of the camera system are unknown, but RED believes that the final product will rival every other camera in the market (RED isn’t referring to smartphones) that isn’t a RED product.