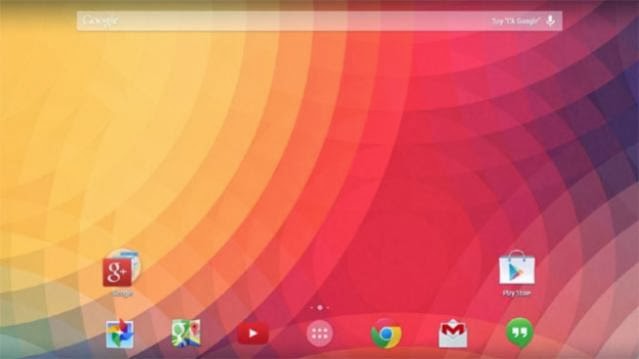 The launcher released officially by Google will give you quick access to Google Now, right on the home screen. You will only need to swipe right to enter Google Now from your first home screen and view your cards. The “always-on” voice command of Nexus 5 is not available for the Nexus 4, but you can still hit the voice icon on the persistent homescreen search bar to search or perform activities. You can also swipe up from the on-screen navigation buttons to reach Google Now.

Using the voice commands, you will be able to not just access data from the Internet but you can also ask your phone to fire up apps, send a message or even play a song. The Google Now experience will also bring along full-screen viewing and larger viewing area and even the wallpaper extends across the phone.

The Google Now launcher is currently limited to a few devices that includes Nexus ones and Google Play Edition devices, which is bound to make a lot of people unhappy. Earlier, the KitKat experience on these devices looked and felt slightly different from the one on Nexus 5.

The opacity of the top bar, larger icons and new wallpapers and even easy accessibility to Google Now were missing from it. The official release should change this, though there’s no word on whether it will be available for other devices which are running Google Now. As you may know by now with Android KitKat, the launcher is actually a stub app within the Google Search app (better known as Google Now), which activates the launcher functionality.